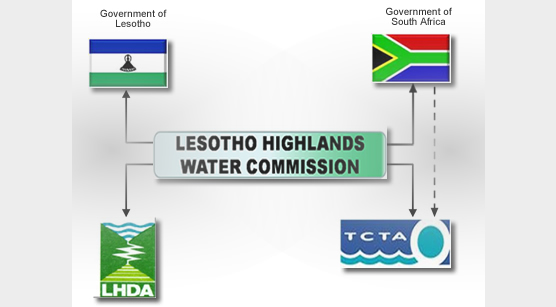 by the Treaty of 1986 signed between Lesotho and South Africa on the implementation of the Lesotho Highlands Water Project (LHWP).

The Lesotho Highlands Water Commission (LHWC) is composed of two delegations, one from each Party to the Treaty (Lesotho and South Africa). Each party has nominated three representatives constituting its delegation as well as an alternate for each of the nominated representatives. The two delegations are independent and report directly to their respective governments. The LHWC as a body reports to the two governments, through their Designated Authorities (Ministry of Natural Resources in Lesotho and Department of Water Affairs in South Africa). The LHWC is being coordinated by the Secretariat, which provides administrative support to both delegations and is the channel of communication between the LHWC and the outside world.